Do You Believe in Monsters? 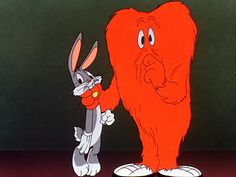 One of Fodder’s earliest memories was that of a nightmare.

In this dream, Fodder was being chased around a department store by a giant, red “hair monster” - exactly like the one from Bugs Bunny. No matter where he ran, the monster would find him.

In his terror, Fodder would climb into a storm drain conveniently located on the floor near him. He would watch as the monster ran over the storm drain repeatedly - never looking down, to Fodder’s relief.

I’m not sure why this is important. I’m putting this here, simply, because a confidant recently triggered the memory.

I still believe in monsters

— from Toehider - “Do You Believe in Monsters?"